Sermorelin is a peptide derived of Growth-Hormone Releasing Hormone (GHRH), which in simple terms means a chemical compound similar to the GHRH but with slight differences in its composition.

Sermorelin is also known by its chemical name sermorelin acetate or GRF 1-29. As mentioned above, the compound is a peptide analogue of a Growth Hormone-Releasing Hormone whose production reduces with age. Interestingly Sermorelin is used diagnostically as an anti-ageing treatment. The peptide is also a key part in how researchers currently treat growth hormone deficiency in patients suffering from aids. [R]

Sermorelin is also known as a synthetic agonist of ghrelin, the newly-discovered gut peptide which binds to the human growth hormone (GH) secretagogue receptor. Ghrelin has two major effects, stimulating both GH secretion and appetite/meal initiation.

Sermorelin has been extensively studied for its utility as a growth hormone secretagogue and animal studies have shown its effect on food intake [R].

The Sermorelin for sale from Behemoth Labz is intended for laboratory research use only and is not for human consumption.

As mentioned above, Sermorelin is a Growth Hormone Releasing Hormone analogue. This analog is made by recreating a peptide containing the first 29 amino acids that make up the natural GHRH.

Clinical research notes some of the potential effects or benefits may include the following:

How does Sermorelin Work?

Sermorelin works by stimulating pituitary gene transcription of hGH messenger RNA, increasing pituitary reserve and thereby preserving more of the growth hormone neuroendocrine axis, which is the first to fail during aging. [R]

Basically, GHRH is produced as a function of the hypothalamus and pituitary gland. Its primary goal is the potentially ability to increase growth hormone secretion. GH, in turn, is researched for its potential to increase bone density and muscle mass, reduce body fat, and enhance growth in adolescents and children. [R]

Sermorelin may stack well in research with the following:

In a study involving 9 young men and 10 aged men, high-dose Sermorelin treatment showed 24-hour elevated hormone levels among the elderly. Furthermore, at elevated doses, there was no marketable difference in parameters between different age groups. [R]

Sermorelin as a Potential Anti-Aging Aid

Aging has long been represented as a milder form of adult growth hormone deficiency, and since growth hormone replacement has met some success in this respective field, it may be logical to reason that GH replacement or stimulation by GHRH might be beneficial in aging. [R]

These findings have led to widespread claims on the potential of sermorelin as an anti-aging therapy that may have the ability to restore the body’s natural hGH production.

IGF-1, also known as Insulin Like Growth Factor, deficiencies is dangerous and can lead to a variety of health complications. In children may inhibit bone growth and overall growth development, resulting in a shorter than normal stature. In adults, decreased production can lead to low bone density, less muscle mass, and altered lipid levels. [R]

According to recent research, Sermorelin has shown the potential to increase GH production and promote fat reduction. This is theorised due to the fact that there is a definite correlation between adults who are obese, and have trouble losing weight, and hormone levels that are lower than those who are at a healthy weight. Therefore, by increasing GH levels and promoting fat loss, Sermorelin can potentially benefit the body composition of overweight adults. [R]

According to research, enhanced Sermorelin levels above a specific threshold may potentially be linked to increased sexual desire and libido. In addition, healthy growth hormone levels and to secrete growth hormone have been closely related to a healthy sex drive. [R]

A clinical study set out to examine the potential effects of Sermorelin on muscle endurance. Once nightly administration of Sermorelin to healthy subjects between the ages of 64 and 76 years, found a marketable improvement in an abdominal crunch test for muscular endurance. [R]

What is the half life of Sermorelin?

Sermorelin has a relatively short half-life of 11-12 minutes.

Sermorelin is legal as a prescription medication. Behemoth Labz sell Sermorelin for research use only. This product is not intended for human consumption.

Where to Buy Sermorelin? 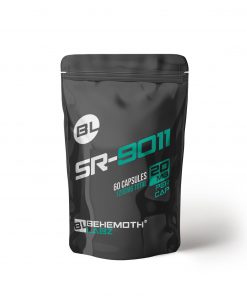 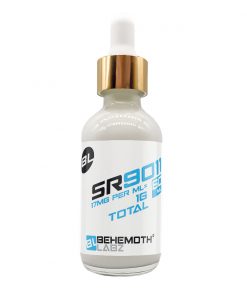